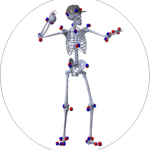 The ANR project ENTRACTE is a collaboration between the Gepetto team in LAAS, Toulouse (coordinator) and the MimeTIC team. The purpose of the ENTRACTE project is to address the action planning problem, crucial for robots as well as for virtual human avatars, in analyzing human motion at a biomechanical level and defining from this analysis bio-inspired motor control laws and bio-inspired paradigms for action planning. For more information, please follow this link. 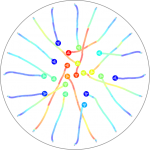 PERCOLATION is a project funded by the French Research Agency (ANR JCJC), for young researchers. It is led by Julien Pettré. The purpose of PERCOLATION is to develop next generation crowd simulators by mathematically formulating microscopic simulation models based on perceptual variables (especially visual variables). Agents are equipped with synthetic vision their reaction is simulated considering the pixels they perceive. The goal is to model a perceptual control law as close as possible to the real human’s perception-action loops that drive local interactions.

SPAFER is a project funded by the French and European Space Agency (CNES and ESA). It is led by Frédéric Derbré in collaboration with Olivier Loréal (INSERM U1241, University Rennes 1). The purpose of SPAFER is to better understand the mechanisms by which iron misdistribution occurs during spaceflight, and whether artificial gravity could prevent this issue. The expected results of this project will  improve recommendations to astronauts during long-term travel (e.g. Mars), especially to prevent spaceflight-induced anemia. 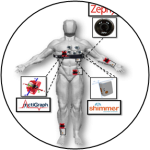 The goal of the SHERPAM project is to conceive, implement, and validate experimental devices allowing biophysical data of mobile subjects to be gathered and exploited in a continuous flow. Three application domains will be considered for SHERPAM: heart failure patients monitoring (HF), the evaluation of functional limitations of arteriopatic patients, and the recognition and quantization of physical activity of a given population. This last goal often requires an estimation of the energy expenditure in order to quantify the level of PA and EE. SHERPAM gathers research teams from several scientific domains and from several laboratories of Brittany (IRISA-Université de Bretagne Sud, LTSI-Université de Rennes 1, M2S-Université Rennes 2 and ENS Rennes, CIC-IT 804-CHU of Rennes and LAUREPS-Université of Rennes 2), in order to constitute a pluridisciplinary research consortium able to grasp and tackle the technical as well as the societal issues raised by these applications. 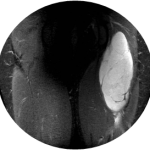 APSARC is a 2-year project funded by the University Hospital of Rennes (CORECT) led by Mickael Ropars and Amélie Rebillard. The purpose of the APSARC project is to determine the effects of physical activity levels on the development of liposarcoma and related health disorders. The expected results of this project will thus improve recommendations to patients during pre-operation period.

IROMUS (2015-2016)
Physical inactivity and insulin resistance: what is the role of iron? 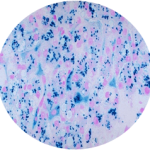 IROMUS is a 1-year project funded by the Regional Council of Brittany (ID2Santé), led by Frédéric Derbré. Dysmetabolic iron overload syndrome is now recognized as fostering the development of insulin resistance and all related diseases (i.e. type 2 diabetes, cancers). The purpose of the IROMUS project is to identify the effects of physical inactivity on iron metabolism and its potential role in the development of insulin resistance by using in vivo and in vitro approaches. This project is conducted in collaboration with the Iron and liver team of the unit INSERM U991.

IPC-Angio Trial is a 3-years project funded by the Rennes University Hospital. This project will primarily aim to evaluate the effect of remote ischemic preconditioning (RIP) on the occurrence of nephropathy associated with iodine-containing contrast media after scanner. It will also determine pathophysiological mechanisms involved in the RIP including the role of oxidative stress.

Lower extremity peripheral arterial disease (LEPAD) is a highly prevalent chronic disease. Cardiovascular mortality of LEPAD patients at five years ranges between 18 to 30%. LEPAD is primarily caused by atherosclerosis that induces an inadequate blood flow to meet the tissues demand due to the narrowing of the arteries. In a recent study in LEPAD patients, we showed, from a one hour GPS recording, a high variability of the patients’ walking capacity (i.e., walking distances between two stops induced by lower limbs pain). Results suggested that in most patients previous stop duration before each walk was a predictive parameter of this walking variability. Whether there is an optimal or minimal recovery time influencing the walking capacity in LEPAD patients has never been studied. This study is a prospective, cross-sectional study in exercise pathophysiology. The main goal is to determine, following a walk that induces ischemia, the influence of the recovery duration on subsequent walking performance in LEPAD patients.